Home >  News & insights >  Returning a vehicle sold before it has been paid for...?
About us Team Expertise News Business Packs E-books Corona CSR Jobs Contact us
NL EN FR

Returning a vehicle sold before it has been paid for...?

It sometimes happens that someone buying or leasing a car on instalments actually has other intentions and resells the vehicle before having fulfilled his or her payment obligations under the loan or lease contract. In some cases, the original loan or lease holder and the vehicle even disappear.

Banks and leasing companies then have to start a search with the help of the police, which in some cases can take up to several years.

It often turns out that the vehicle in question has become the property of someone who is unaware of any wrongdoing, or who may be in cahoots with the original owner-lender or lessee. This is not always clear.

The question then arises as to whether this new owner - who may or may not be bona fide – is obliged to return the vehicle or not.

The Court of Justice of the European Union recently ruled on this issue. 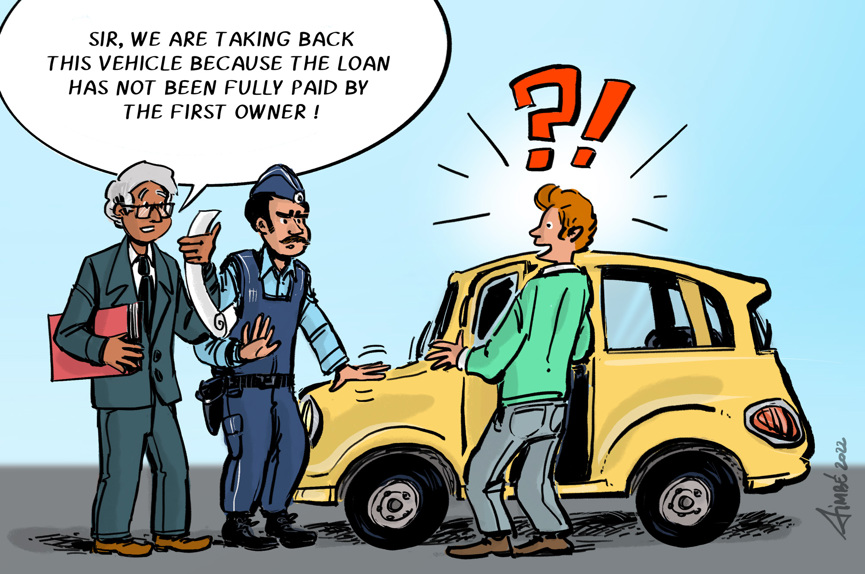 1. What exactly is the issue?

In 2014, a Bulgarian national (EF) bought a car by taking out a bank loan from a bank based in Norway. He paid off the loan for one and a half years, but then stopped the repayments. The Norwegian bank then gave instruction to proceed for an enforcement of its rights on the vehicle.

The vehicle in question was considered "stolen, illegally acquired or lost". The Kingdom of Norway therefore entered an alert in the NSIS (National Schengen Information System) for the seizure of the vehicle.

In May 2017, the vehicle was identified by the Bulgarian police in Silistra and seized, together with the registration certificate, from a third person in whose name the vehicle was registered. It later emerged that the same vehicle had been purchased in Bulgaria by AB, who then resold it to DB in Varna, Bulgaria, in March 2017.

However, the new owners challenged the legality of its return to Norway.

They argued that there was no convincing evidence that criminal proceedings had actually been initiated in Norway in relation to the vehicle and that they had acted in good faith when purchasing the vehicle.

The competent court referred a question to the Court of Justice of the European Union for a preliminary ruling. It took the view that Norway's alert on the vehicle in question had been issued contrary to the objectives of the SIS II Decision. In his view, the alert in question did not fall within the scope of the SIS II Decision (defined in Paragraph 2) because the case concerned a private law relationship between the original owner-borrower and the Norwegian bank.

For our country, this means mobilising the following bodies:

The SIS II receives input from the Schengen States and contains data and information relating to persons, objects and means of transport, as well as the instructions to be followed and the measures to be taken if the person, object or means of transport is found.

The Sirene Manual for SIS II was adopted in 2008 in order to facilitate the work of the Sirene Bureaux as well as the Sirene II users involved in the daily Sirene operations. The Sirene Bureaux - each Member State had to designate one - were created to ensure the exchange of certain supplementary information between Member States related to alerts. They serve as a single contact point for Member States for the purpose of exchanging supplementary information in connection with the entry of alerts and for allowing the appropriate action to be taken in cases where persons or objects have been entered in SIS II and are found as a result of a hit.

3. What exactly is the subject matter of the reference for a preliminary ruling?

The referring court wished to know whether Article 39(3) of the SIS II Decision is to be interpreted as precluding national legislation (in this case Bulgarian law) which requires the competent authorities of the executing Member State are obliged to execute an alert entered in the SIS II concerning an object, even if they have doubts as to the grounds for issuing that alert, as referred to in Article 38 (1) of the SIS II Decision.

The Court refers to the SIS II Decision, the Sirene Manual and the national rules of the executing country (Bulgaria).

As regards the SIS II Decision, the Court refers to the following elements:

The Court then refers to the Sirene Manual, which states that, in accordance with the national law of the executing Member State, the following measures may be taken: seizing the object found or taking the necessary precautionary measures, identifying the person holding the object and contacting the Sirene Bureau of the issuing Member State.

The authorities of the executing Member State should be able to take these measures as quickly as possible, taking into account the need for swift action.

According to Article 21 of the SIS II Decision, it is up to the Member State issuing the alert to determine whether the case is adequate, relevant and important enough to warrant entry of the alert in SIS II. Article 49, (1) of the SIS II Decision provides that it is also the Member State issuing an alert that remains responsible for ensuring that the data are accurate, up-to-date and entered into SIS II lawfully. Furthermore, only that Member State is authorised to modify, add to correct, update or delete the data which it has entered.

According to the Court, it is not for the authorities of the executing Member State to call into question the validity of the alert, since, if they do so, this could jeopardise the effectiveness of operational cooperation between the police and judicial authorities.

The Court notes that Article 39, (3) of the SIS II Decision refers to national measures, the executing Member State having a margin of discretion in the choice of measures it takes. Consequently, that provision does not preclude the Member State, where it has chosen to adopt an obligation to issue, from being obliged to implement it.

The Court of Justice answers the question referred for a preliminary ruling that Article 39 of the SIS II Decision does not preclude national legislation which obliges the competent authorities of the executing Member State to execute an alert on an object entered in SIS II, even if they have doubts as to the grounds for issuing such an alert.

Consequently, the new owner of the vehicle in question has no defence on the basis of the arguments put forward and is obliged to return the vehicle.

This is an interesting ruling for banks and leasing companies whose leased or loaned vehicle, is illegally sold to a citizen of another EU Member State.

A Member State executing an alert has the right to decide to hand over a vehicle to an issuing Member State, and this decision cannot be questioned.