Replacing a negligent contractor: Yes we can!

A common question on a random Thursday morning, in this case about two weeks ago:

Number one in the list of construction-related irritations: the (sub)contractor who does not respect the agreed timing. Site plannings generally do not leave much room for delaying and the late execution of work A often leads to delays in the execution of work B and before you realise it, the whole planning is upside down and the delivery date is not sure anymore.

But what can you do to resolve this kind of problems?

Case law and legal doctrine have solved this by also accepting the extrajudicial replacement of a contractor (thus without going to court, also called "replacement on ones own authority") but, under (very) strict conditions. 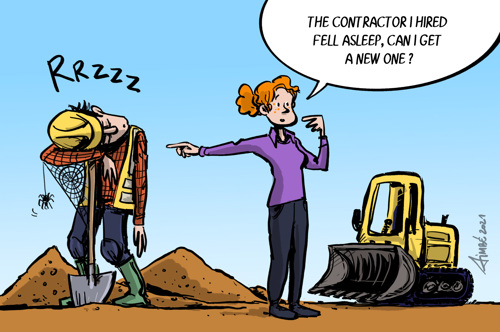 A negligent contractor could only be replaced if the following strict conditions are met:

If these conditions are not fulfilled, the out-of-court replacement of a contractor could be invalidated by the court and the costs of the new contractor are to be borne by the principal. Moreover, one could also be ordered to pay damages to the original contractor. Not at all a pleasant situation.

2. The Supreme Court relaxed these conditions

Fortunately, the Supreme Court recently relaxed the conditions for the out of court replacement of a contractor.

According to the Supreme Court, "In exceptional circumstances, such as extreme urgency", the principal may replace the negligent contractor without judicial authorisation.

It therefore seems that the Court has ruled that not only in case of extreme urgency the contractor can be replaced, but also in all exceptional circumstances. What qualifies as 'exceptional circumstances' will become clear in the coming years through case law, but it is clear that the extrajudicial replacement can now be used in more cases than before.

In specialised media, I read comments that the Supreme Court, by not explicitly mentioning the condition of a serious contractual breach of contract, would have abandoned this condition as well.

However, one loses sight of the fact that the Supreme Court must limit itself to the questions submitted to it.

This judgment simply does not mention the condition of serious breach of contract, so that it cannot be concluded either that the judgment has made this condition obsolete.

The other conditions also still seem to apply since the Supreme Court also mentioned that in case of an extrajudicial replacement, "the creditor must take into account the reasonable interests of the debtor". Indeed, the requirements of a contradictory report the construction works, a prior notice of default and the notification of the substitution serve to protect the interests of the co-contractor.

Whereas previously it was ruled that the party that unlawfully proceeded to extrajudicial replacement was not entitled to any compensation for the work it had carried out by another contractor, the Supreme Court ruled that the principal is at least entitled to the 'internal production costs', i.e. the internal cost that the initial contractor would have had in any case if it had carried out the work.

3. A termination or replacement: which is more interesting?

In case of an extrajudicial dissolution, however, the agreement is terminated in its entirety and the contractor is no longer responsible for the (further) performance of the agreement.

An extrajudicial replacement of a contractor can therefore be useful if problems only concern part of the work or if, for example, the principal wants to keep the guarantee given by the initial contractor.

It will therefore be important to carefully consider the best choice in the event of a negligent contractor: a replacement of the contractor or a termination of the agreement. We will, of course, be happy to help you to make the right choice.

In the context of this article, we have only discussed building contracts, but the principles of replacing the contractor or terminating the contract apply to all contracts. Provided the applicable conditions are met, a defaulting supplier, for example, can also be replaced.

Would you like to receive more information or assistance from the specialists of Seeds of Law? Don't hesitate to contact us at +32 (0)2 747 40 07 or via info@seeds.law.