The reduced VAT rate of 6% for the demolition and the reconstruction of buildings will be extended to the entire Belgian territory as from January 2021. Previously, this reduced VAT rate was limited to 32 cities. Both private individuals and promoters will be able to benefit from this measure. The extension will apply until 31 December 2022.

1. Why the Federal Government introduced this measure?

The corona crisis is having an impact on the order books of building contractors and on the budgets of citizens and families. These measures should make it possible to build or buy a house more cheaply.

The demolition of a building and the subsequent reconstruction of a private house benefit from the reduced VAT rate of 6% in 32 Belgian cities.

In order to benefit from this advantage, the following conditions must be met:

This rule will of course remain in force after 31 December 2022. 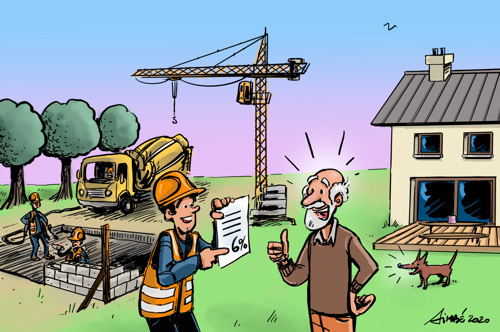 3. What additional measures have been taken?

3.1 Extension of the basic rule

For the period from 1 January 2021 to 31 December 2022, the basic rule will apply to the entire Belgian territory and not only to the 32 cities referred to above, if:

How does the government calculate the habitable surface?

The habitable surface is the sum of the surface of all living quarters, measured from and to the inside of the walls.

The habitable surface includes kitchens, living rooms, dining rooms, bedrooms, living areas in the attic and cellars, offices and all other areas intended for housing, provided they have a minimum surface area of 4 m² and a minimum height above the floor of 2 meters.

Spaces used for the exploitation of an economic activity are also included.

For the same period, the VAT rate for the demolition of a building and the associated reconstruction of a private house intended for long-term rental as part of social policy will also be reduced from 12% to 6%.

These are the conditions for benefiting from this measure:

If the conditions are no longer met, a declaration must be submitted and the benefit must be repaid for the current year and the remaining years of the 15-year period.

The reduced rate of 6% has also been made applicable to the transfer of houses and associated land by the taxpayer who has carried out the demolition of a building and the associated reconstruction of a private house.

This is also applicable to the establishment, transfer or re-establishment of rights in rem (other than ownership and specific exceptions provided for in the VAT Code), to a private house and associated land, which are not exempted from VAT (e.g. in the case of new construction).

It concerns a transaction on which the tax due became payable between 1 January 2021 and 31 December 2022.

In addition, it must be a private house which is the only owner-occupied property intended for the domicile of the buyer-natural person or intended for letting to a social landlord's office.

4. What about current projects?

Ongoing projects can also benefit from this new measure, provided that the declaration is submitted by 31 March 2021 at the latest.

The system will end on 31 December 2022, but will also be limited depending on obtaining your building permit. If you obtain your permit after 1 July 2022, you will only be able to invoice up to a maximum of 25% of the total amount of the works at 6%. In addition, this is invoiced no later than 31 December 2022.