Home >  News & insights >  Residential tenancy: termination by the landlord for his own use
About us Team Expertise News Business Packs E-books Corona CSR Jobs Contact us
NL EN FR

Residential tenancy: termination by the landlord for his own use

When renting out a property, the landlord receives rent and loses the physical enjoyment of his property which he has to safeguard to the tenant.

However, due to certain circumstances, it can happen that the landlord wishes to take back the physical enjoyment of the rented property.

What should he do then?

Under the old federal law on leases, it was already possible for the landlord, under certain conditions, to terminate the lease on the tenant's main residence for his own use. 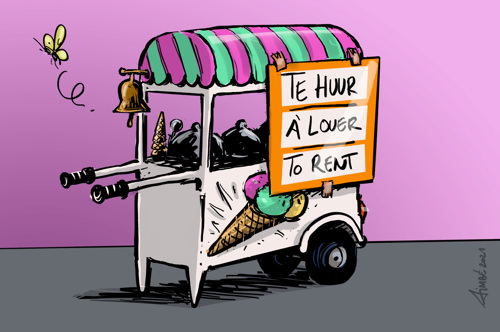 1. Termination for own use in the Brussels Capital Region

In Brussels, the old federal regulations have been resumed. The landlord may terminate the tenancy agreement - entered into for a period of nine years - at any time subject to six months' notice.

If the beneficiary of the termination is a blood relative in the third degree, the notice period cannot expire before the end of the first three years of the lease.

The lease of short duration (maximum three years) cannot be terminated by the landlord for his own use.

The notice period commences on the first day of the month following the month in which the notice was notified. The notice must state the identity of the person who will occupy the rented property and the relationship with the landlord. The tenant may request proof of kinship with the landlord, who must reply within two months. If the landlord fails to provide this proof, the tenant may claim the annulment of the termination, at the latest two months before the end of the notice period.

The own use (or use by another beneficiary) is subject to certain conditions.  The own use must start within one year after the end of the notice period or the return of the rented property to the lessor.  Thereafter, the property must remain effectively and continuously occupied for at least two years.

To "occupy" the property itself does not mean that the landlord has to establish his main residence there. He can also occupy the property for another purpose, e.g. for running a business.

If the property is not occupied within the stipulated period and conditions, the tenant is entitled to an indemnity of eighteen months' rent. This compensation is a lump sum and is only due because the conditions of the termination have not been met. The tenant does not have to prove any damage.

2. Termination for own use in the Walloon Region

The rules governing the termination of a tenancy for private use in Wallonia are almost identical to those in Brussels.

The only difference is that, in addition to the spouse, the tenancy may also be terminated in favour of the legal cohabitant and his or her descendants and blood relatives.

3. Termination for own use in the Flemish Region

In Flanders, the regulation is also largely based on the old federal law, with one other nuance.

The landlord can terminate the nine-year lease at any time, subject to six months' notice, if he wishes to occupy the property personally and actually.

If he wishes to terminate the lease in favour of another beneficiary, descendants, blood relatives, etc. up to the third degree, then the notice period cannot expire before the end of the first three-year period of the lease (which in the old federal regulation and in the Brussels Capital Region only applied to blood relatives in the third degree).

In Flanders, the tenancy can also be terminated in favour of the legally cohabiting partner in addition to the husband or spouse.

The conditions for the termination and the subsequent occupation of the leased property and the rules for compensation in the event of non-fulfilment of the conditions are the same as those applicable in Brussels. The short-term lease (maximum three years) cannot be terminated by the landlord for his own use.

4. Exception in case of extraordinary circumstances

In the three regions, the landlord who does not occupy the rented property on time or long enough can escape the obligation to pay compensation equal to eighteen months' rent. To do so, he must be able to prove extraordinary circumstances. This is a concept that already existed in the old federal legislation and has been further defined by doctrine and case law.

Extraordinary circumstances can be coincidence or force majeure, e.g. as a result of natural forces, but force majeure is not absolutely required.

For example, a court accepted that the landlord did not have to pay compensation when he accepted the request of one of his other tenants to change flats. In a recent judgment, the Justice of the Peace of Forest ordered a landlord to pay compensation whereby the landlord had given notice to terminate the lease because his son was going to start studies in Brussels. However, the son in question had abandoned his plan to study in Brussels and went to study abroad. A move abroad for professional reasons is not always accepted as an extraordinary circumstance. It seems that it must be an opportunity that one cannot refuse, rather than an active search for a job abroad.