A headscarf ban in the workplace does not in itself constitute discrimination provided that the employer pursues a consistent policy of neutrality. So decided the Labour Court of Ghent.

The Labour Court of Ghent had to rule on the neutrality policy of an employer prohibiting the wearing of religious symbols.

In this case, it concerned a ban on head scarves. After a legal battle of more than 14 years, the Labour Court finally decided that a headscarf ban (also) on the workfloor does not constitute indirect discrimination provided that the employer in question pursues a consistent policy of neutrality.

An employee, who had been working as a receptionist in an international security firm for three years, informed her employer that she would be wearing a headscarf during working hours.

The employer, however, pointed out to her that wearing visible political, philosophical or religious features was against his policy of neutrality. Shortly afterwards, a uniform for receptionists became compulsory and he asked her to collect her uniform. The employee immediately took sick leave. Despite several requests from the employer to resume her work and to respect the dress code of his company, the employee in question refused to follow this instruction. In the end, the employer decided to dismiss her because he considered that, as long as she refused, she would be unable to fulfil her contractual obligations. 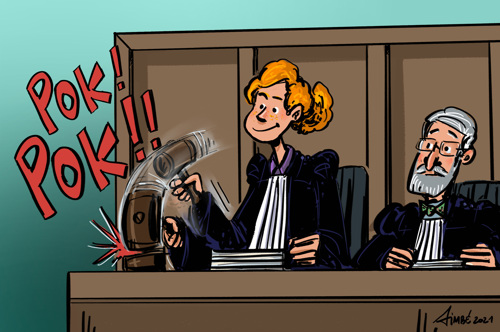 The former employee went to the Antwerp Labour Court because she believed that the ban on expressing religious convictions in the workplace, as imposed by her employer, constituted prohibited discrimination. The dismissal because of her refusal to comply with this ban and her demand to be allowed to wear a headscarf in the workplace would, in her opinion, constitute discriminatory dismissal. She therefore claimed additional compensation in the amount of six months' salary.

The Court of Cassation then submitted a preliminary question to the European Court of Justice.

The European Court of Justice ruled that there is no direct discrimination on the basis of religion or belief when a private company imposes a ban on wearing a headscarf as part of a coherent and systematic policy of neutrality.

However, the Court of Justice held that such an internal rule could constitute indirect discrimination if it were established that the effect of the neutral obligation was to put persons of a particular religion or belief at a particular disadvantage. Nonetheless, such indirect discrimination is neutralised if that obligation is objectively justified by a legitimate aim and the means of achieving that aim are appropriate and necessary. A legitimate aim might be the pursuit of good customer relations and a policy of political, philosophical and religious neutrality.

3. And no indirect discrimination either

The Labour Court of Ghent, to which the case had been referred by the Court of Cassation, had to make a final decision regarding the indirect discrimination.

The former employee, assisted by Unia, argued that the policy of neutrality imposed by the employer on all employees, including those who have no visual contact with clients, constitutes prohibited discrimination. Therefore, these parties argued that the dismissal based on the refusal to comply with the neutrality policy was discriminatory.

The Labour Court ruled that the employer did pursue a policy of neutrality. The ex-employee and Unia described the disadvantaged group as a group of persons whose religious convictions require them to respect certain dress rules or for whom this is at least an important element in expressing their religious convictions.

However, the Labour Court stated that it is not within the jurisdiction of the Labour Court to decide what is or is not required by any faith or philosophical belief. According to the Labour Court, the existence or absence of such 'obligations/important elements' is as such interpreted by the believers themselves. Finally, the Court stated that, in view of the separation of church and state, neither the Belgian courts nor the Belgian authorities can or may interfere with religious practices as long as they do not infringe the rights of third parties. Hereby, the Labour Court emphasised the principle of separation of church and state.

The Labour Court further argued that if a distinction were made and thus greater protection were to be granted to those religious practices that are described as 'compulsory' by the believers concerned, this would, moreover, create impermissible discrimination against all other religious practices.

The relevant part, according to the Labour Court, was the question whether the group of persons wishing to express their religious or philosophical convictions was particularly disadvantaged when they engage in social activity, such as at their place of work. The Court ruled that, in this context, it is irrelevant whether the persons concerned consider such expression to be 'compulsory' and whether the neutrality policy in force has a detrimental effect on those persons who feel the need to express their political, philosophical or religious beliefs.

In this case, the Labour Court ruled that there was no indirect distinction. There is no protected category since persons of all persuasions are subject to the same prohibition. As stated earlier, no account can or should be taken of whether or not a religious practice is considered compulsory or still important. It is impossible to say that persons who adhere to religions that impose specific visible obligations are particularly disadvantaged.

Like the Court of Justice of the EU, the Labour Court ruled that it is within the limits of every employer's discretion to pursue a legitimate policy of neutrality. This is the case when the employer pursues a policy of religious and philosophical neutrality, for example by introducing a headscarf ban for employees who do not come into contact with "clients" (and the clients of these clients).

According to the Court, a firm has the right and even the obligation (if it is to remain on the market) to meet the legitimate demands of its customers. This is certainly the case when they come from both the public and the private sector, and when the company offers security services as well as reception services, whereby its employees must obviously be able to be deployed flexibly. Both courts accept that a policy of neutrality may be called for, not only because of the diversity of the clients, but also because of the special nature of the staff's activities, which constantly involve personal contacts with outsiders and are decisive for the employer's own image, but also, and especially, for the public image of its clients.

In addition, the Court firmly stated that it is not up to the former employee and Unia to impose their philosophy of "active pluralism" on the employer and thus to determine which corporate image they may consider legitimate. Neutrality or active pluralism is and remains the choice of the employer.

Like the Court of Justice , the Labour Court ruled that the employer's legitimate policy of neutrality is "appropriate and necessary" to achieve its objectives. Indeed, the ban on wearing a headscarf contributes to the implementation of the company's policy of religious and philosophical neutrality, which the employer has imposed on itself.

The verdict was that there was no indirect discrimination and the appeal was declared unfounded.

4. What should we remember from this case?

Every employer has the right to choose to pursue a strong policy of neutrality, prohibiting for example the wearing of visible political, philosophical or religious badges in the workplace.

But such a policy of neutrality must be consistent. It must apply to all employees, but may also be limited to staff who are in direct contact with their customers.

In that case, it is strongly recommended that a neutrality policy is framed by an appropriate statement of purpose.

With a consistently conducted neutrality policy whereby an appropriate objective has been defined, there is no discrimination against persons who wish to express their religious or philosophical convictions at work.

From this judgment, one may conclude that an employer's neutrality policy is not discriminatory as long as it is in line with the objective it aims to achieve. It is therefore 'one thing' or 'another'.