Recently, a decree of the Flemish Government was published that changes the organisation and procedural rules of certain Flemish administrative courts. One of these courts is the Council for Permit Disputes. With this decree, the Flemish Government aims to optimise the current procedures in order to simplify and speed up the treatment by administrative court cases. In addition, disputes without direct interest or prejudice or without valid arguments are discouraged.

The most important changes are summarised below:

1. Payment of court fees at the time of filing an appeal

The new decree stipulates that court fees are to be paid at the time of filing an appeal.

2. The permit holder and other intervening parties

2.1 The permit holder automatically becomes a party to the proceedings

Until now, permit holders have always had to file a formal application to intervene in a procedure in which their permit is disputed.

The decree simplifies this, as the permit holder automatically becomes a party to the proceedings and can therefore always assert his defence.

2.2 Other parties may intervene directly

Other parties can also benefit from a simplification, since they will now be able to intervene directly, without having to make a formal request in advance.

Intervening parties will also not be obliged to pay court fees, which removes an additional obstacle. 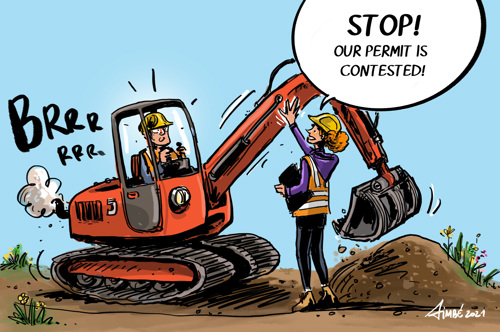 3. The interest of the claimant in appeal is interpreted more strictly

As a result of this amendment, an argument can only lead to the cancellation of a permit if:

4. The possibility of mediation is simplified

With the new decree, an interim judgment will no longer be necessary before starting a mediation procedure.

5. A litigation fee when a request for suspension is rejected

Currently, no litigation fee is due when a request for suspension is rejected. This will be the case in the future.

In this way, the Flemish Government wishes to further discourage the initiation of suspension proceedings.

6. The Council's power of substitution is extended

From now on, the Council for Permit Disputes can also substitute itself for the public authority if the authority granting the permit has had several opportunities to properly motivate its its decision, but has failed to do so.

Until this amendment, this was only possible if it related to the specific binding competence of the authorities. This is therefore a very important amendment.

These amendments will not enter into force until an implementing decree is published. We will keep you informed.