Corona crisis and the general meeting of the ACO

Now that several measures have been taken to have people respect social distance because of the corona virus, it is not possible anymore for general managers of "associations of co-owners"  ("Vereniging van mede-eigenaars/Association des co-propriétaires") - (further ACO) to convene their general meetings.

Before, the law did not provide for the possibility to organise general meetings of co-owners by electronic means of communication.

The legislator now has responded to this shortcoming by the Covid-19-law of 20 December 2020.

1. ACO's and their legal obligations about the holding of a general meeting 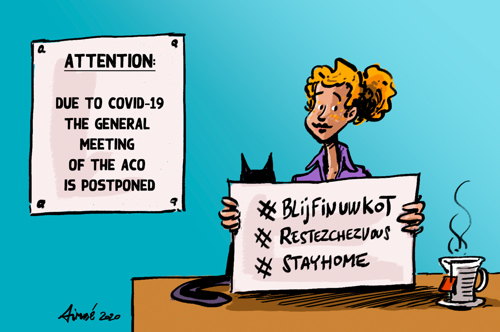 No sanction is foreseen should the general meeting not be held on time, according to the internal rules.

However, it is part of the legal duties of the general manager to organise this meeting.

The first lockdown following the corona crisis which began on 13 March 2020, confronted the ACOs with ambiguities putting them in a particularly delicate situation. Indeed, the ACOs remained legally obliged to hold their general meetings, whereas gatherings in general had been made impossible by the corona crisis measures.

The possibility to hold a general meeting "remotely", for example via skype or another digital channel, was not (yet) been foreseen by the law.

Indeed, decisions of the general meeting must be taken with the required majorities of the votes of the co-owners who are present or represented at the time of the vote. The problem was that there was no possibility to verify the effective presence of co-owners from a distance.

2. The consequences of the "corona" measures

Due to the coronavirus, it is not possible anymore for general managers of an ACO to convene the general meeting of the co-ownership.

In view of the fact that not all co-owners are actually living in the building to which the co-ownership relates, they would be prevented from exercising their voting rights at the general meeting as a result of the government's instructions.

The federal government had decided, by Royal Decree, that general meetings must be held within five months from the end of this crisis period.

During this period of postponement, continuity was ensured: the mandates of the general manager (the trustee) and the members of the co-owners' council were extended until the next general meeting.

According to the law of 20 December 2020 general meetings of co-owners may be held at a distance, even after the period of the corona crisis.

2.2.1 The deadline for holding the annual general meeting is extended

ACO Annual General Meetings that had been postponed due to the corona crisis and which have not yet been held by 1 October 2020, may be postponed by the building manager until the next 15-day period designated by the internal rules.

However, in the event of an urgent decision or at the request of one or more co-owners who own at least one fifth of the shares in the common areas, the building manager remains obliged to convene an extraordinary general meeting.

In the event of a postponement of the General Meeting, the mandates that are about to expire and that would have been on the agenda to vote are automatically extended until the next General Meeting.

This therefore concerns, among others, the mandates of the building managers, members of the co-ownership councils and the supervisors of the accounts.

Previously, only physical meetings were allowed, with the exception of the written procedure in case of unanimity.

Pursuant to the law of 20 December 2020 remote participation to the general meeting is allowed, provided that the convocation to attend so provides.

This is an important novelty in the co-ownership law, as a result of which physical meetings are no longer mandatory.

2.2.4 The unanimity requirement is temporarily relaxed

If it is not possible to hold a general meeting, even at a distance, the law provides for a temporary relaxation of the unanimity requirement.

Normally, if decisions falling within the competence of the general assembly are taken in writing, such decisions must be taken by the members of an ACO unanimously, except for those decisions requiring an authentic deed. The building manager is required to keep minutes of the meeting.

The law of 20 December 2020 provides for a temporary relaxation of this unanimity requirement until 30 June 2021.

Thus, until 30 June 2021, decisions of the general meeting of an ACO may be validly taken when more than half of the members of the ACO participate in the vote, provided that those members have at least half of the shares of the common parts. With regard to voting by the ACO, the majority required for decisions on individual items on the agenda of a General Meeting shall depend on majorities required by the law.

The ACO shall take into account the ballots received within three weeks of the convening of the meeting, by mail or e-mail. In case of urgency and provided this is indicated in the convocation notice, this period may be reduced to eight days from the date of dispatch of the notice.

The possibility of holding digital meetings is applicable since 24 December 2020. However, this possibility is now provided for in the co-ownership law and will therefore not be limited in time .

Please, do not hesitate to contact us for information or assistance on 02/747 40 07 or CoronaTaskforce@seeds.law.