The UBO register, object of a real soap

A Royal Decree (RD) recently came into force which adapts the operating modalities of the UBO register in a number of areas to the framework of the fifth European Money Laundering Directive. In addition to a number of technical and linguistic corrections, this RD introduces a number of fairly far-reaching changes.

We already informed you for quite some time how to handle the UBO register. The introduction of and the legislation about the UBO register and its IT application have clearly not gone smoothly.

The most recent Royal Decree entered into force on 11 October 2020.

Below we explain the changes made, which are pretty much substantial.

1. Extension of the information to be provided

The information to be provided regarding the beneficial owner (hereinafter UBO) is extended.

As of 11 October, each obliged entity (company, (i)npo, foundation, trust, fiduciary and similar legal structure) is required to upload in the UBO register any document that supports and demonstrates the adequacy, accuracy and topicality of the registered data. This includes the ID card/passport of the UBO, the deed of incorporation and the articles of association of the company, the register of shareholders, agreements relating to the transfer of shares, etc.

These documents are only accessible by the competent authorities.

The practical scope of this provision is currently unclear.

Since this Royal Decree entered into force on 11 October, it is advised to upload as soon as possible all documents that provide evidence, although we have been informed by the Finance administration that they accept that such information will be provided by 30 April 2021.That is the ultimate date on which the obliged entities must confirm their data in the UBO register on an annual basis. The administration would send a message to this effect a few weeks in advance via the E-Box of the online application. However, this information is given after a telephone call; hence it remains subject to change, for the time being.

In some cases, this additional documentation requirement will prove that no one of the first two categories could be identified as a UBO and that because of that reason someone of the third category had to be designated as a UBO. This will then in fact become rather a negative documentation obligation.

Beware! This new documentation obligation applies to all UBO's, including those that are already registered.

An indirect UBO means, any individual who owns or controls the obliged entity through one or more intermediary legal entities. 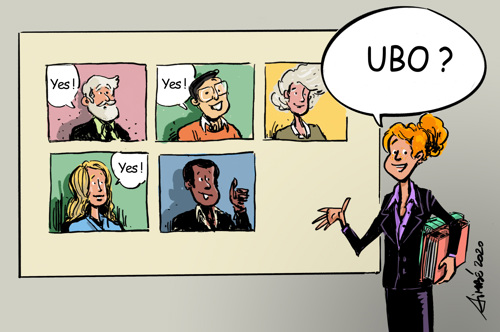 2. Compulsory registration in the Crossroadbank for Enterprises

Trusts, fiduciary managers and similar legal constructions are henceforth obliged to register in advance in the Crossroadbank for Enterprises in short RLE (Kruispuntbank van Ondernemingen - KBO/Banque Carrefour des Entreprises - BCE) if they have to register a UBO.

This requirement is remarkable because the consequence is that every foreign trust, fiduciary manager and similar legal construction must comply with the Belgian Economic Law, prior to comply with the UBO legislation. The question arises as to whether this is enforceable.

From now on, not only the current data of a certain number of categories of UBO's but also the historical data will be accessible to anyone.

Access to these data has already been granted to the competent authorities and to the UBO itself. But, they are also accessible by the "members of the population", without having to prove a legitimate interest.

More specifically, this relates to the data of certain categories of UBO's of (i)npo’s and foundations, such as the members of the board of directors and those persons who are authorised to represent a foundation or (i)npo, the persons in charge of the daily management and the founder(s) of a foundation.

For other data and other categories of UBO’s, a legitimate interest still must be demonstrated.

Access to the history of data relating to a UBO is deemed necessary in order to allow users to carry out their analyses, taking into account the historical evolution of the control structure of the obliged entity.

A number of changes have also been made with regard to the protection of personal data in order to comply with the GDPR.

The persons responsible for providing information are henceforth responsible for the processing of personal data and must ensure the accuracy. A UBO that wishes to have its data corrected must therefore contact the obliged entity that has registered its data, which must then amend or remove them from the register.

5. Limited presentation of the data

Each UBO previously already could request the finance administration to hide certain data in whole or in part.

As soon as an application or revision is submitted, the information on the UBO remains hidden until the final decision is taken. This is not the case for the information concerning the intermediary entities between the UBO and the obliged entity.

In this way, an organised administrative appeal is set up.

Furthermore, interconnection with similar registers in other Member States is being implemented via a so-called 'European Central Platform'.

There are also minor changes with regard to sanctions. For example, the finance minister can 'delegate' his power to impose sanctions. Fines will henceforth be notified electronically and no longer by registered letter.

The purpose of the UBO register is to find out who is behind certain legal structures and entities. To this end, a whole serie of details of influential shareholders and/or directors must be recorded.

As a result of recent changes, both the documentation and information to be recorded in the UBO register and access to the information on UBO's by the competent authorities and the public have been significantly extended.

This makes the administrative burden for obliged entities required to disclose information even more heavy. They will have to add to the register any document proving the details of the beneficial owners (UBO's). This applies not only to newly added UBO's or changes to the data, but also to the data already registered which remain unchanged.

Since the Royal Decree in question already entered into force on 11 October, in principle all these documents must be uploaded as soon as possible. As mentioned above, the Finance administration gives it until 30 April 2021 at the latest. However, this information is informal, subject to either confirmation or changes.

In addition, the obliged entities must comply with the GDPR and must respond adequately whenever a UBO wishes to have its data corrected or deleted.

Of course, we are always ready to answer all your questions in this respect and to assist you further with your registration in the UBO register. Until now, we have assisted several obliged entities with registering the relevant data in the UBO register. Please contact us on +32 (0)2 747 40 07 or via info@seeds.law.

The UBO register – FAQ revised by the FPS Finance