The pitfalls of the B2B law for service and distribution contracts

As the B2B law applies to all contracts between businesses, it will generally concern contracts for the provision of services and commercial distribution that are common in business life. These contracts sometimes reflect a certain imbalance between the parties and will therefore be a potentially important target for the application of the principles of the B2B law.

As we explained in the introduction to our practical guide, subject to a few exceptions, the new B2B law applies to all contracts between businesses, and to all the clauses of these contracts.

However, there is a certain amount of legal uncertainty with respect to the practical application of this B2B regulation, which has important consequences for commercial partnership agreements such as distribution contracts and service contracts.

Numerous pitfalls arising from the B2B law may be hidden or appear in your distribution and service contracts. Be aware of them!

1. Is your contract affected?

Commercial contracts mainly concern sales concession agreements, commercial agency and franchise contracts, as well as, in general, all contracts for the provision of various services and consultancy contracts.

It is certain that all of these contracts must comply with the B2B legislation and be drafted in such a way as to avoid unfair terms which could be sanctioned by the courts.

This is all the more important as certain contractual relationships, such as commercial distribution, are naturally characterised by a certain economic and sometimes legal "imbalance" between the parties and are therefore particularly concerned by the new protective provisions.

In practice, many of these contracts are likely to be affected by a clause which may be considered unfair, as it creates manifest inequalities which could be considered unjustified. The "normal" imbalance between the parties might then be considered disproportionate and have legal consequences.

Particular attention should therefore be paid and the key words are prudence and anticipation. 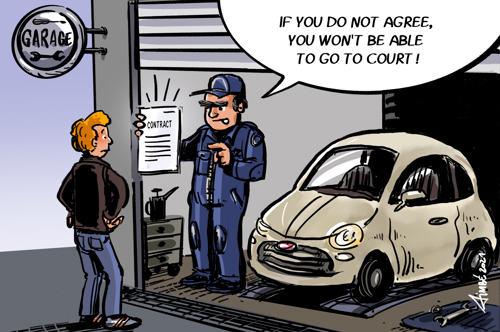 2. Which clauses should be paid attention to?

Upon receiving or drafting a contract, or when renewing or amending an existing contract, you must ensure that the contractual provisions do comply with requirements of  the new B2B law.

Your attention must first of all focus on the possible presence of a "black listed" clause (prohibited in all circumstances), and then extend to the analysis of "grey listed" clauses (presumed unfair).

Based on our experience, we have compiled a set of fairly standard clauses in contracts for the provision of services or distribution of goods, which will now have to be carefully reviewed, to avoid that they would  be annulled.

3. What can you do in practice and what advice can we give you?

We advise you to act proactively, as soon as you can, as a matter of priority.

To do so, you will need to review your (standard) contract(s) and adapt them to the new regulations.

As we have already indicated, the assessment of the unfairness of many provisions is very broad and linked to many factors (such as current usage or the circumstances of the contract) and it is therefore advisable to be as complete and precise as possible when drafting the terms of your contracts to explain the context justifying the terms chosen.

We are happy to already give you some ideas:

As part of this very important preventive work, the experience of our firm's practitioners will enable us to check your contracts, eventually proposing improvements to bring your clauses into line with these new regulations.

This will not only prevent your contractual relationship from significantly harming your company's interests, but also prevent you from being confronted with questions about the validity of your contracts.

We are therefore at your entire disposal to assist and advise you in the revision of your contracts for the provision of services and/or the distribution of goods, if you believe that they contain such clauses, or if you simply want to be sure that they do not. Contact our specialists via info@seeds.law.