Limiting the pressure on open space has been a hot topic in Flanders for years. However, practice has shown that a general construction stop can’t simply be introduced through policy instruments.

In previous years various measures have been introduced to translate the proposed so-called "concrete stop" in a juridical way (including through the Codex-train of 8 December 2017). Other measures and instruments have been prepared but have come to a standstill or were dismissed. Meanwhile there is no longer talk of a "concrete stop", but of the (milder term) "building shift".

A circular of the Flemish Government (RO 2017/01), that provided concrete measures to resist additional usage of space in undeveloped areas (namely in the form of a previous project meeting and a documented 'study of needs and facilities') was (partly) annulled by the Council of State.

The difficulties to introduce decisive instruments on the Flemish level, has led to the fact that various local authorities have taken matters in their own hands. For example, several municipalities have issued a (temporary) general construction stop. Other municipalities have chosen for a milder selective construction stop, temporarily refusing certain functions or typologies for building on certain locations. 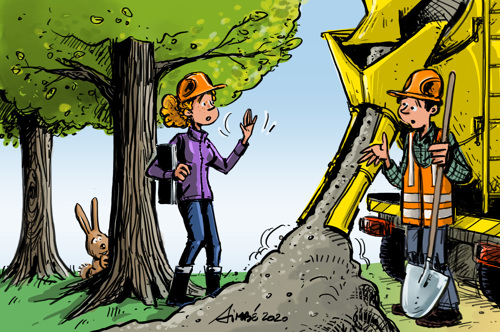 Local governments describe these measures mostly as 'politically desired developments' (in the sense of article 4.3.1. of the Flemish Code for Urban Planning), which can be taken into account by the permitting authority when evaluating a permit application.

Needless to say that these kind of local decisions have caused a lot of protest, mainly form the real estate sector.

Recent development show that these decisions leave room for discussion from a juridical point of view.

In this sense, the Flemish Government has confirmed in her guideline 'Politically desired developments' dated 6 July 2020 that politically desired developments (hereafter: PDD) can’t contradict nor change planning regulations. When these regulations allow building activities, PDD can’t impose a general construction stop. Concerning the selective construction stop, the principle applies that PDD can’t be treated in the same way as 'binding regulations' and do not exempt the permitting authorities from the obligation to carry out a concrete assessment of a permit application.

Also, a local general construction stop has been annulled by the supervising authority (in this case: the governor of the province Flemish Brabant) on 13 August 2020.

These developments acknowledge the view expressed in jurisprudence that a general construction stop can’t simply be introduced by policy instruments. These measures can only be imposed through the appropriate legal instruments, namely through regional zoning plans/policy plans, a spatial implementation plan or town planning regulation.