Major adjustments in the pipeline for environment, living environment and spatial planning

Approval in principle of a Collective Decree by the Flemish Government

An adaptation of several decrees on environment, living environment and nature and spatial planning is on the way

A 'preliminary draft decree containing various provisions on environment, living environment and nature and spatial planning', also known as the 'Collective Decree', was approved in principle by the Flemish Government.

The Collective Decree contains a whole series of amendments to various decrees on the environment, the living environment and nature and spatial planning.

The aim of these amendments is, on the one hand - as always - to remove pointless and superfluous rules in the existing legislation and to eliminate ambiguities, and on the other hand to achieve greater transparency, clearness and clarity in the regulations.

However, the Collective Decree also contains a number of substantive changes that have a major impact on planning and licensing policy.

Below, we will go over the most important changes. 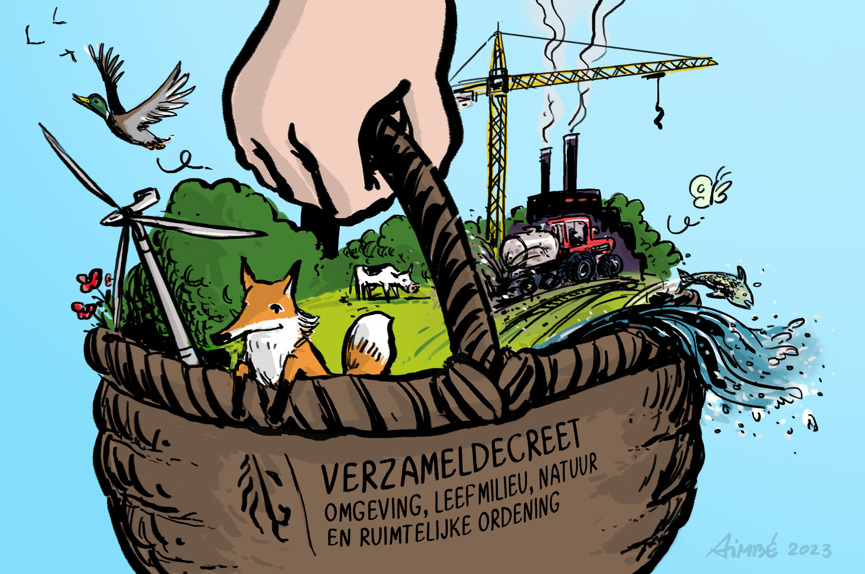 1. Municipalities can no longer introduce permit or notification requirements via ordinances

This leads to a confusing system that is difficult to justify and leads to infringements.

For this reason, this system will be scrapped and the specific provisions of existing regulations will be repealed by operation of law after a transitional period. For the sake of clarity, local authorities are recommended to take their own initiative to remove the relevant articles when amending the ordinance.

2. The principle of planning compensation in the case of SIPs is introduced

Pursuant to the Collective Decree, municipalities, provinces or Flanders will not be allowed to simply realise an additional supply of building land through the implementation of so-called 'hard' destinations (such as housing, activity, recreation, community facilities).

If the planning authority nevertheless wants to make a spatial implementation plan in which new hard zoning is indicated, at least the same area of unrealised poorly located or superfluous hard zoning will have to be converted into 'soft' zoning, such as forest, nature or agricultural land.

This principle of planning compensation fits in with the general policy objective of preserving open space and slowing down and eventually stopping the increase of additional land take.

3. The finishing rule will be amended

Today, the so-called "finishing rule" provides for additional houses to be built against a so-called "waiting façade" of another house even if the plot concerned is not zoned for housing (with the exception of spatially sensitive areas such as forest or nature conservation areas).

In practice, the application of this rule leads to an expansion of ribbon development and additional land take (building, paving, landscaping) and additional alienation to the zone.

For the purpose of preserving open space and building shift, the rule is lifted in areas not zoned for residential development. At the same time, the application of this rule is actually made possible in residential reserve areas, where it was not possible before.

The current legislation provides for the possibility to permit changes to functions that are not zoned. However, it is not possible to obtain a regularisation permit for a change of function that is alien to the zone. Indeed, one of the conditions for obtaining a function change alien to the zone is that the building or building complex for which the function change is requested is mainly authorised at the time of the permit application, also with regard to its function. This is not the case when the change of function has already been realised without a permit.

The Collective Decree puts an end to this deadlock by providing the possibility of obtaining a regularisation for already realised situations that qualify for a permit.

However, this would not affect the applicable application conditions for obtaining a function change that is alien to the zone and would not result in undesirable use of space being facilitated.

The Collective Decree wishes to eliminate a number of bottlenecks that still prevent transparency today, both during and after the permit procedure.

The Environment Counter currently does not allow the public to view all the documents in a file during the procedure, which means that the public concerned still often has to go to the town hall to see the complete application file or permit.

The Collective Decree stipulates that submitting a permit application, request, initiative, objection or appeal is tantamount to consenting to its disclosure (and the accompanying documents) to the public on the Environment Counter during any public enquiry and during the appeal period.

The intention is that copyrighted plans will also be able to be consulted digitally via the counter during public examination.

The granting of an environmental permit for the subdivision of land or an update thereof will automatically mean that the subdivision plan and subdivision regulations will be freely available during the term of the permit, without the drafter being able to invoke his copyright.

Several opinions on the preliminary draft are currently yet to be obtained. The opinion of the Council of State (Legislation Section) is also yet to be obtained. The intention is to adopt the decree at third reading in spring 2023, after which it can be submitted for discussion and consideration in the Flemish Parliament. Only after acceptance in Parliament and publication in the Belgian Official Gazette will the decree enter into force in principle.