Every transaction now risks merger control by the European Commission

On 26 March 2021, the European Commission published a new guidance on the application of the referral mechanism set out in Article 22 of the EU Merger Regulation.

This new guidance enables Member States to submit transactions that fall below the national turnover thresholds to the European Commission for assessment. In this article, we take a closer look at the new guidance and its impact.

A concentration occurs when there is a lasting change of control

The lasting change of control implies that a decisive influence can be exercised on the activity of an undertaking.

These concentrations can have innumerable consequences. For example, they may have industrial or commercial objectives, leading to the development of new markets and products to the benefit of consumers. But, some mergers may also harm the functioning of the market by increasing prices or even blocking certain markets. 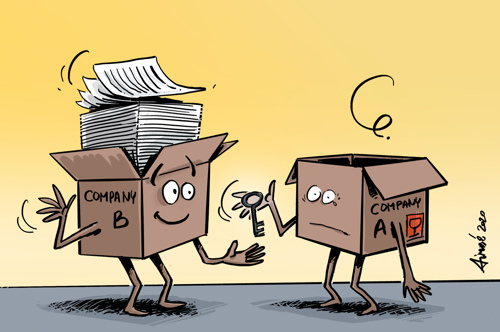 2. Member States can notify concentrations themselves

In order to ensure that mergers do not lead to lasting damage to competition in the internal market, merger notification and control was created by the European Union.

It is of great importance to the Member States that concentrations which may harm or impede competition in the internal market are notified.

But now the Commission's new guidance changes that. From now on, Member States will be able to submit mergers which fall below the national turnover thresholds for assessment to the Commission as well.

Member States can request the Commission to examine a concentration which affects trade between one or more Member States and threatens to significantly affect competition within the territory of the Member State or States joining the request.

With this directive, the Commission decided to adopt a different interpretation of Article 22 of the EU Merger Regulation, giving each Member State the opportunity to submit concentrations which fall below their national turnover threshold to the Commission for assessment.

This guidance is not a new legislation or an amendment to an existing legislation. The Commission is merely providing a new interpretation of the EU Merger Regulation.

3. Why this extension of merger control?

The question can be raised why this new interpretation was necessary.

It seemed obvious that concentrations below the national turnover thresholds can hardly affect trade between Member States and certainly cannot have any effect on competition in the internal market.

But nothing could be further from the truth.

The Commission's assessment results showed that a number of transactions where companies have low turnover but strong competitive potential in the internal market were not assessed by the Commission or by the Member States. As a result, such transactions, which fall below the national turnover thresholds, may fall through the net.

The new interpretation was created to ensure that the referral mechanism of Article 22 of the EU Regulation would be used more often in the future. By controlling more concentrations, significant effects on competition and the internal market can be avoided.

There is a clear trend towards mergers between companies that already play or may play a significant competitive role on the market(s) at stake, despite generating little or no turnover at the moment of the concentration.

For example, there are so-called "killer acquisitions". This term generally refers to established competitors acquiring innovative companies, such as start-ups, with strong competitive potential but little or no turnover in the early stages of development, in order to avoid potential competition in the future.

Also in the digital, pharmaceutical and biological sectors, it is more common to see competing and innovative companies forming mergers that may have an impact on competition and the internal market, but which are not subject to merger notification and merger control obligations.

This risks to missing out on important innovation that could benefit the public interest but harm an established competitor.

Such concentrations, which may have a potential impact on competition or eliminate an important competitive force, but which fall below the national turnover thresholds, can now be submitted to the Commission for assessment.

4. Which concentrations can be submitted?

In order to facilitate the task of the Commission, the Guidance describes the categories of cases which may qualify for referral to it without the need for notification of the transaction under the law of the referring Member State(s).

It also sets out the criteria that the Commission may take into account in deciding whether to accept such submissions.

It may also be an actual or potential significant competitive force or an undertaking with access to or impact to competitively valuable assets or providing products or services that are key inputs or components for other industries.

5. Consequences and conclusion of the new Guidance

The consequence of the new interpretation of Article 22 of the EU Merger Regulation following the Guidance note of 26 March 2021 is that merger control can now be carried out by the European Commission even if transactions fall below the national turnover thresholds.

The new Guidance issued by the European Commission obviously has implications. Companies must be alert and take this new Guidance into account when planning their transactions.

In concrete terms, this means that an accurate competition analysis becomes all the more important. With every merger, it is very important to take into account a possible merger control by the European Commission, even if the EU and national turnover thresholds are not met.

Would you like to receive more information or assistance from the specialists of Seeds of Law? Please do not hesitate to contact our specialists at +32 (0)2 747 40 07 or via info@seeds.law, leo.peeters@seeds.law and toon.rummens@seeds.law.