Expected for almost two months, the law that partially and temporarily modifies the insolvency legislation has been adopted on 21 March 2021 at last.

This is nearly two months after the general moratorium on bankruptcies, that was in force since 28 October 2020, expired.

1. Why this legislative intervention was necessary

The main purpose of this measure is to adapt the existing restructuring toolbox to the needs of Belgian companies facing major financial difficulties due to the corona crisis.

These adjustments, although temporary, were necessary because the corona measures have hit the country's economy hard.

Of all Belgian companies, it are the SMEs that suffer most from cash-flow problems, and their lack of liquidity poses a serious threat to the continuity of their activities.

The "judicial reorganisation procedure" (hereinafter "JRP") is one of the rescue mechanisms that a company can resort to in order to ensure its continuity. However, this procedure is very strict as it requires the filing of numerous supporting documents. Otherwise, the petition of the company seeking protection, but also seeking to reimburse its creditors, will not be accepted by the court.

The legislator has therefore decided to intervene in order to relax the requirements of this procedure, to modernise it and to make it more accessible, as you will see below. 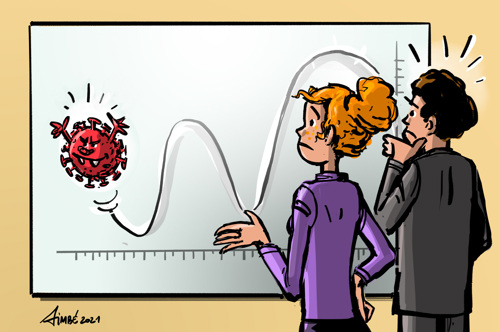 2. Introduction of a preparatory phase and of the pre-pack agreement

The Law of 21 March 2021 brings an important innovation to the classic JRP, with the introduction of a new concept and a new legal provision.

Such an agreement is negotiated before the admission to the JRP as such, which will take the form of an "accelerated JRP".

How does this work in practice?

The stressed company requests the president of the court to appoint a judicial officer who will participate in the negotiations in order to facilitate the conclusion of a pre-pack agreement.

The company must then demonstrate that its continuity is threatened in short or long term, and must file a number of documents, namely

This pre-pack phase takes place in complete confidence. This is important in order to prevent creditors, such as banks, from immediately cancelling the loans and putting the company in further economic difficulties.

Under the classic procedure, the company is protected from its creditors as soon as the application for a JRP is filed and at least until the court has ruled.

This is not automatically the case for this particular pre-pack procedure, but during the preparatory phase the company can be granted discharge of all or part of its debts in monthly instalments, and/or be given additional time to pay its debts.

If the court allows it, the company enjoys a similar protection with regard to its creditors, who cannot sue it for a period of maximum 4 months.

At the end of his assignment, the judicial officer communicates the pre-pack agreement to the president. The president then acts on this agreement and sends the complete file to the court for the opening of the "accelerated" JRP. Once the file has been forwarded, the company enjoys the classic protection of the suspension, i.e. it cannot be sued by its creditors for bankruptcy or dissolution and no enforcement measures (attachment and others) can be taken against it.

Under normal circumstances, the court will hear the JRP application within 15 days of its submission. It then rules within 8 days of the hearing. If the conditions are fulfilled, the court declares the JRP open and fixes its duration at a maximum of 6 months.

Within the framework of this accelerated procedure for small claims, in the case of an amicable settlement (in case of only one creditor), the court opens the procedure within 5 working days of the submission of the file, and a hearing for the approval of the settlement is scheduled in the course of the month. In the case of a collective agreement (if there are several creditors), the court also opens the reorganisation procedure within five working days, and a hearing is scheduled at least within three months.

It is because of these exceptionally short deadlines that we can speak of an "accelerated JRP".

The Law of 21 March 2021 not only introduces a new concept, but also adapts various provisions of insolvency law.

These include adaptations made necessary by the "social distance" rules, namely by introducing exclusively electronic measures (written submission of the delegated judge's report on REGSOL where it previously had to be submitted orally at the hearing), and also adaptations related to the extension of certain deadlines (e.g. longer deadlines for the consideration of a file by the chamber for stressed companies).

But the most important legislative adaptations concern the admissibility and acceptance of the request for a JRP.

3.1 Request for LCE and submission of documents

Normally, a number of documents must be enclosed with the application for judicial reorganisation, under penalty of inadmissibility. If these documents are not submitted, the application is automatically declared inadmissible, leaving the debtor at the mercy of his creditors and risking being declared bankrupt if he is unable to pay his debts.

From 26 March 2021, these documents will still have to be submitted, but they will no longer be required under penalty of inadmissibility, which should make the procedure more accessible for SMEs with liquidity problems.

The submission of these documents as such entails costs that are sometimes too high for certain companies (accountants' fees, lawyers, etc.). These companies are already short of cash and cannot always afford such costs, which ultimately prevents them from submitting the required elements.

As a result of the corona measures that have been in force for just over a year now, it is inevitable that many SMEs will find themselves in this situation.

With the law of 21 March 2021, the legislator is temporarily lifting this sanction of inadmissibility in the event that the required documents are not submitted.

It thus offers these companies extra "oxygen". Companies that are unable to submit the required documents when filing their petition for a JRP can still do so at the last two days before the preliminary hearing.

If, despite this deadline, they are unable to submit these documents, they must justify this impossibility by means of a note detailing the reasons for their inability to do so. This note must be submitted no later than two days before the hearing. Consequently, on the one hand, the sanction of inadmissibility is lifted and, on the other hand, the law now allows the court to grant the debtor's application even in the absence of the documents required by law.

In any case, the court decides on the request for a pre-pack procedure on the basis of the elements and information it has received.

This important adjustment to the procedure are the expected and announced flexibility, as well as a certain moratorium with regard to the above-mentioned sanction of inadmissibility.

Currently, many SMEs are in economic difficulties as a result of the coronas measures and only can be saved through a JRP.

3.2 Condition(s) for opening a JRP

The JRP is opened if the continuity of the company is threatened, in the short or long term.

Since 26 March 2021, the fact that the company has already been the subject of a JRP in the past three years no longer prevents it from initiating new procedures. If the company has already filed and obtained a petition for the opening of a JRP within the last five years, the rights of the creditors obtained in the first procedure can henceforth no longer be questioned in the new one.

3.3 Vote on the reorganisation plan

In the case of a JRP by collective agreement, the court will hold a hearing at which the creditors will either vote or not vote on the reorganisation plan proposed by the company.

The law of 21 March 2021 now makes it possible to vote on this reorganisation plan electronically, in order to avoid the need for multiple speakers at a hearing.

The LCE by collective agreement enables the debtor to negotiate a repayment plan with his creditors, which may include a limited reduction of certain claims.

In order to encourage the use of the JRP, the law already provides a tax exemption for creditors who have their claims reduced within the framework of a collective agreement.

The law of 21 March 2021 extends this tax incentive to amicable agreements concluded during the preparatory phase.

It will expire on 30 June 2021, but may be extended. An evaluation is scheduled for 15 June 2021 at the latest; proposals for improvements will be made on that occasion.

We obviously welcome this new legislation, which will certainly help to protect many companies and our country's economy. These "new" provisions have only been in force for a short time and therefore we cannot yet draw full practical consequences from them.

However, as insolvency specialists, we would like to make a few observations.

First, this significant relaxation means that the court could, in theory, grant a company's application for a JRP without even having been able to establish the company's financial situation through proper accounting.

On the one hand, some companies that do not meet the eligibility requirements for a JRP could still benefit from it.

There is a real risk that the JRP will be diverted from its purpose, which is to restore the continuity of the business and help struggling companies that are willing to seek a solution to their problems, to the detriment of the rights of creditors who are in some way disadvantaged by the opening of a JRP and the suspension imposed on them.

On the other hand, in the absence of evidence of the firm's financial situation and profit prospects, the courts may be too reluctant to open a JRP and grant a suspension to firms that in such circumstances would meet all the eligibility requirements.

Practice will undoubtedly allow some safeguards to be built into this temporary legislation.

Another imperfection of the law, which we wish to denounce, concerns its temporary application.

These new insolvency rules should be aimed, first and foremost, at rescuing companies that have been facing disproportionate economic difficulties for a year, which get worse every month and increasingly threaten their continuity. It is therefore regrettable that this application period was not made applicable for a longer period from the outset, and we hope that an extension will be considered during the legislative assessment on 15 June.

Are you or your company in trouble and do you want to secure it for the future?