The authorities have taken several measures to support businesses and employment, under the pressure of the corona crisis. Measures in relation to tax and social security, temporary unemployment and state financial support were taken. An agreement with the financial sector to grant payment facilities was reached, as well.

In the first coronacrisis, Royal Decree No 15 introduces a general suspension to protect temporarily enterprises affected by the corona crisis. This measure was applicable until 17 June 2020.

Now this measure will be reintroduced for a (renewable) period from 24 December 2020 until 31 January 2021.

1. The agreement with the financial sector

The agreement with the financial sector aims to grant payment facilities to viable businesses and self-employed persons who are confronted with problems to pay off their debts as a consequence of the corona crisis. New loans will be given covered by the state guarantee.

We refer to our article "Coronacrisis and the State loan guarantee"

The most important term is "viable", and how this will be used.

2. A general suspension for enterprises affected by the corona crisis

In the firts coronacrisis wave, Royal Decree No 15 introduced a temporary protection for companies against conservatory and enforcement attachment and bankruptcy (and judicial dissolution) and the dissolution of agreements due to non-payment. This measure was applicable until 17 June 2020.

This measure has been reintroduced for a (renewable) period from 24 December 2020 until 31 January 2021.

But this temporary suspension of means that may lead to insolvency until 31 January is  only applicable for all enterprises who are enforced to stop their activities as a consequence of the corona crisis.

The new moratorium applies only to companies:

This does not affect the obligation to pay due debts.

What do these suspension measures entail?

2.1 Protection against attachment and means of enforcement

This provision does not apply to immovable property and to the conservatory attachment of seagoing and inland vessels.

During the suspension, enterprises cannot be declared bankrupt on summons or, if they are a legal entity, dissolved by the courts.

Nor can a transfer under judicial supervision be ordered of all or part of its activities.

However, a bankruptcy or judicial dissolution remains possible if these take place at the initiative of the Public Prosecutor or a provisional administrator appointed by the president of the Enterprise Court.

Bankruptcy or judicial dissolution remains possible if the summoned enterprise itself agrees to it.

2.3 Protection within the framework of a reorganisation plan

Payment terms included in a reorganisation plan approved by a court before or after the entry into force of this Royal Decree will be extended by the duration equal to the suspension granted.

Agreements concluded prior to entry into force of the Royal Decree cannot be dissolved unilaterally or judicially due to the non-payment of a monetary debt payable under that agreement.

This provision does not apply to employment contracts.

2.5 Obligation to pay due and payable debts does not lapse

This provision does not affect the obligation to pay due debts. Also the common  contractual penalties such as, inter alia, the exception of non-performance, off-setting of debts and the retention right remain unaffected.

It is without prejudice to the application of the Financial Security Law of 15 December 2004.

Nor does it affect employers' obligations.

2.6 The President of the Enterprise Court may may grant exceptions

Any interested party may ask the President of the Enterprise Court to examine whether a company falls within the scope of this Royal Decree and, if necessary, to lift this suspension in whole or in part.

This possibility is provided for in order to avoid abuses. The procedure can be initiated by means of a writ of summons and will be dealt with as in summary proceedings and on a priority basis over all other cases.

In his decision, the President of the Enterprise Court shall take into account the circumstances of the crisis and the extent to which they have affected the enterprise concerned.

In particular, he will examine whether the enterprise's turnover or activity has decreased significantly as a result of the corona crisis, whether economic unemployment was fully or partially applied for and whether the government has ordered the closure of the enterprise. In doing so, the President will take into account the applicant's interests.

2.7 Suspension of the obligation to file for bankruptcy

If the bankruptcy conditions are met due to the corona crisis, the debtor will be subject to a suspension to file for bankruptcy, during the suspension period granted by this Royal Decree.

This does not affect the debtor's ability to file for bankruptcy.

New credits - including suppliers' credits - granted to protected companies during the suspension period are protected against subsequent bankruptcy. The same applies to the securities provided for these credits or other acts established in execution thereof.

In addition, the lenders of these new credits cannot be held liable solely because the new credits have not effectively enabled the continuity of all or part of the debtor's assets or activities.

3. Instruments of the insolvency legislation

Enterprises can call on the legal instruments of the insolvency legislation to safeguard their business, even if the banks have granted payment facilities, or should banks or creditors refuse to grant loans or payment facilities (supported by the suspension introduced by Royal Decree No 15 (point 2)).

Hereafter we give a short overview of the most important alternatives the law offers.

3.1 Appointment of a business mediator

Businesses and entrepreneurs who face difficulties to pay their debts can request the president of the court to appoint a business mediator. The latter can assist with the reorganization, both within as outside the proceedings regarding the judicial reorganization.

Businesses and entrepreneurs who face difficulties to pay their debts can offer to two or more, or all their creditors an amicable arrangement. This can be reached in concertation with the business mediator.

The parties are free to agree on the terms and conditions of their arrangement.

However, some conditions must be met to obtain the protection provided by the insolvency law:

The amicable agreement must be filed with a specific register. 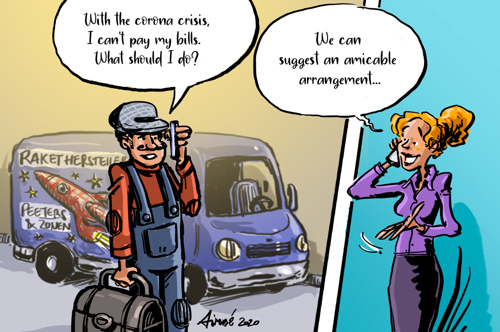 If the continuity of a business (a company or a self-employed person) is threatened, whether immediately or further in the future, the proceedings regarding a judicial reorganisation can be started.

These proceedings allow the business to maintain the continuity of its activities, either partially or in total.

As from the moment that the proceedings are started with the court, and pending the decision of the court, the business cannot be declared bankrupt or dissolved by a court decision. The forced execution of court decisions or other deeds, such as a public sales are stopped.

The court decision to open the judicial reorganisation, allowing the suspension, has several consequences, that all aim to give the business the opportunity to continue its activities, without giving it a free pass. The business cannot just escape from its obligations; creditors and contracting parties keep certain of their rights.

Hereafter follow some of the most important consequences of the protection, but they are not unconditional and in certain cases the court has to be involved:

During the suspension period claims cannot be executed anymore and/or their (forced) execution cannot be continued; no seizures for debts that originated from prior to the proceedings are not allowed. The court must be involved for certain cases ;

But, on the other hand the suspension does not cause the termination of the agreements. They will remain in force and have to be executed in accordance with their terms and conditions. Agreements can be terminated by each party, if certain conditions are met. The business in reorganisation has the right to unilaterally suspend the execution of certain agreements.

Agreements with continued performances, including those that generate interest, will not be suspended, at least in respect of the performances to be executed after the opening of the proceedings. More in particular, loans and the related payment obligations have to be respected.

Social security and tax payments will not be suspended and have to be paid as and when due.

The aim of the proceedings regarding the judicial reorganisation is to safeguard the continuity of the business activities, but it is definitely not a free pass. Creditors keep certain rights, and can recover at least a part of their claims, as well as possible (contractual) damages, if they follow the rules of the law.

If you are confronted with financial difficulties or if you are a creditor, please call us (+32 (0)2 747 40 07) or send an e-mail at coronataskforce@seeds.law.