The new regulation on the abuse of economic dependence came into force on 22 August 2020. Hereinafter we list 8 questions that every company should consider to find out whether it may be dominant in contractual relationship and if abuse of economic dependence may be imputed. You will also learn how essential it is for every company to have the existing agreements reviewed as well as the contractual models used in order to assess the company's situation in this context (dominant or dominated position and potential abuse of the situation).

Most companies have already heard about this recent Belgian revolution in commercial agreements between companies (“B2B agreements”). This new law provides for sanctions in the event of "abuse of economic dependence" as well as the regulation of unfair clauses that may have incidence of the validity of all or part of even already existing agreements. We refer in this context to the article already published on our website.

The first stage of the implementation of this new law has now been completed with the entry into force, as of 22 August 2020, of the regulation concerning the concept of abuse of economic dependence by one company towards another.

We have compiled the 8 main questions that every company should ask itself in order to comply with this regulation.

1. Why were these new regulations adopted? Is my company particularly targeted?

This new regulation was conceived and designed following the numerous complaints that the Belgian authorities received and which reported the following situations and behaviors: 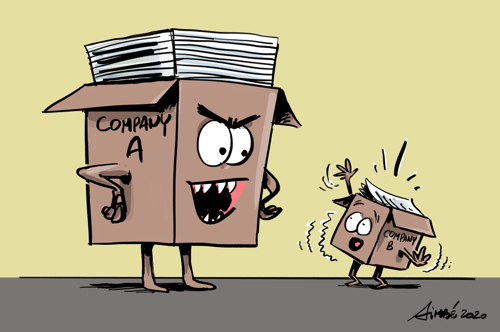 2. What are the specific cases provided in this new regulation?

The law aims to regulate asymmetrical relations between companies, in which one party has a significant economic ascendancy over the other.

The legal criterion for the application of this law is "economic dependence".

What is a "dominant" company?

It is a company in a situation giving it a certain market power enabling to exercise dominance over its partners and to impose benefits and conditions which would impossible to impose without this market power.

What is a "dominated" company?

A company in a situation of economic dependence, for its part, does not have a reasonably equivalent alternative available within a reasonable period of time, under reasonable conditions and at reasonable cost.

One should not forget that it is not forbidden to be in a dominant position and this single consideration cannot be sanctioned. An illegal situation for a dominant company though is to abuse such a situation (2nd condition) and, in addition, such abuse is likely to affect market competition (3rd condition).

3. How should I know if I can be considered as a "dominant" company?

This has to be determined on a case-by-case basis, but the following criteria will generally have to be considered:

Such situations are often found in the context of a "producer-supplier" and "distributor-customer" relationship, but this can apply to many other contractual configurations.

4. Is the size of my company a decisive factor in determining whether I am in a "dominant" or "dominated" position?

This is certainly not the only criterion.

All companies are concerned and, depending on the relationship, be "dominant" or "dominated", both small and medium-sized enterprises and large companies.

A company may be in a position of economic dependency in some relations and have a strong position in other configuration.

For example, a large retail chain may be in a strong position to impose commercial conditions that may be considered as unfair to certain suppliers who distribute their products and, at the same time, be in a position of economic dependence towards its suppliers of, for example, logistics or IT facilities.

5. I am dominant in some of my relationships. But as this is not necessarily prohibited, when do I risk to be sanctioned?

As stated above, an abusive act must have been committed for the new regulation to apply.

In the parliamentary discussions prior to the adoption of the law, the following examples were given as possible examples of abuse:

1. Refusal to sell, purchase or to accept other terms of transaction.

3. Restricting production, marketing or technical development to the prejudice of consumers.

4. Applying dissimilar conditions to equivalent transactions with other economic partners, thereby placing them at a competitive disadvantage.

5. Making the conclusion of agreements subject to the acceptance by the economic partners of additional services which, by their nature or according to commercial usage, have no connection with the subject of such agreements.

6. What is meant by the 3rd condition according to which "competition must be potentially affected by the abusive behavior of the dominant company”?

This is certainly the most abstract condition of the new regulation and It will certainly give rise to practical debate.

The regulation provides that there is abuse of economic dependence when “competition is likely to be affected”. This means that, for this condition to be fulfilled, the impact on the competition of the alleged abuse (of dominant position) does not have necessarily to be effective but is only potential.

There is no additional legal criterium, and it is likely that this condition would be assessed in a fairly flexible manner. It is foreseeable that Courts may, if the first two conditions are met (ie. (i) position of economic dependence and (ii)) abuse of this position), simply refer to the "potential" effect on competition as a result of the identified abuse in order to apply the regulation.

7. What sanctions can I incur?

Abuse of position of economic dependence can be sanctioned by the Belgian Competition Authority with fines of up to 2% of the turnover of the company concerned.

This abuse may also give rise to proceedings before the Courts for damages and claim for termination or cancellation of all or part of an agreement.

Every company, regardless of its size, is affected by this regulation, and should review or have reviewed its existing agreements and any contractual models in order to check whether it finds itself in a situation that could be sanctioned by this new regulation.

Do not hesitate to contact our experts to analyse your agreements and advise you on best practices on +32 (0)2 747 40 07 or info@seeds.law.