Dossier: Together on a road trip through the new property law
We are excited to present to you Seeds of law's brand new "Property Container"
News
Property use rights - joint and several liability
News
Neighbour nuisance - The preventive claim towards neighbours
News
Voluntary shared ownership
News
Conversion works within a forced co-ownership
News
Easements and the obligation to maintain the goods
News
Easement and the consequences of waiving an easement
News
How long does an usufruct last?
News
Usufruct: Maintenance work, contribution obligation and accession
News
The right of superficies and why a long lease right may be more interesting
News
Home >  News & insights >  Voluntary shared ownership
About us Team Expertise News Business Packs E-book Corona CSR Jobs Contact us
NL EN FR

On this site, Victoria highlights the voluntary shared ownership in order to draw your attention to the important aspects of this property law concept.

The concept of forced co-ownership remains therefore not been changed again.

Although we are unable to report any new developments, we believe it is important to raise awareness about two topics about co-ownership.

On this site, we explain the concept of voluntary co-ownership.

In the upcoming site you will read more about the conversion works within forced co-ownership (also known as the "apartment law"). 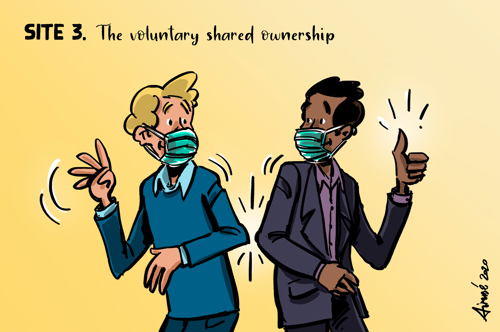 There are two forms of voluntary shared ownership, either fixed-term or open-ended.

Fixed-term voluntary co-ownership shall be enforceable only against third parties for its remaining duration and for a maximum of five years.

In case of a real estate, this form of ownership will only be enforceable after registration of the contract in the competent Registry office. For this purpose, the contract must be notarised.

If you enter into a voluntary co-ownership contract, for example when you purchase property for a specific duration, third parties – i.e. creditors - must respect this co-ownership. However, this only applies to the duration of the co-ownership, which may not exceed five years. In case of real estate, it will only be valid if the contract is registered.

In case of a voluntary co-ownership of indefinite duration, any co-owner may, notwithstanding any other provision to the contrary, terminate the contract subject to reasonable notice.

As co-owner, you should bear in mind that a creditor of one of the other co-owner(s) has the same rights as the co-owner himself to terminate the voluntary open-ended co-ownership.

Therefore, if the contract of voluntary co-ownership does not specify its duration, the co-ownership will not be protected against your own creditors or the creditors of the other co-owners. This protection applies in case of fixed-term voluntary shared ownership, at least for the contractual duration (and therefore for a maximum of five years).

If no agreement can be found between the co-owners regarding the duration of the notice period, the intervention of the judge may be requested.

The judge will then determine the duration of the notice period. In this case, he will take into account the costs already incurred by the parties, the survival of the decisive motives that led the parties to create the voluntary co-ownership and the disadvantage resulting from the termination by the other co-owner. In any event, the notice period may not exceed a period of five years.

3. What is important about voluntary co-ownership?

The figure of voluntary co-ownership can be interesting if you wish to purchase some real estate together with a partner.

When entering into a contract to establish a co-ownership, you should pay attention either to the duration of the co-ownership or - if you do not wish to foresee the duration - to the contractual notice period. This notice period will also apply to your creditors, if any, or those of your co-owner.

When buying property, do not forget to require the notary to register the authentic deed. This is extremely important because without registration, you are not protected against creditors.

You can always call on our team of specialists to assist you in drawing up your contracts for the establishment of the voluntary co-ownership. Do not hesitate to contact us (+32 (0)2 747 40 07 or via info@seeds.law).