The possibility for an association of co-owners to decide with a 4/5th majority to rebuild or demolish a building was cancelled by the Constitutional Court at the beginning of this year. The legislator recently took action in this regard. Read more about what this means for associations of co-owners of a building that is in urgent need of demolition or reconstruction.

1. The decision of the Constitutional Court.

In an earlier article we informed you that the Constitutional Court had cancelled the 4/5th majority rule for co-owners to decide to the demolition and reconstruction of a building.

The Constitutional Court was of the opinion that the law did not provide sufficient guarantees for the co-owner(s) who oppose against a decision to demolish and rebuild a building, but were affected by the decision of the association of co-owners (VME (D) - ACP (F)).

According to the Constitutional Court, there had to be a fair balance between, on the one hand, the requirements of public interest and, on the other hand, the protection of the right to the undisturbed enjoyment of the property.

The cancelled regulation was a major improvement for co-ownerships and this was not denied by the Constitutional Court. The Court was aware that a more efficient decision-making process between co-owners would result in a quicker renovation of old buildings and thus its adaptation to the legal standards relating to hygiene and safety.

However, according to the Constitutional Court, the new legislation could in practice result in a co-owner having no choice but to relinquish his ownership rights and it was not inconceivable that the latter would feel disadvantaged.

In that case, the co-owner himself had to go to the justice of the peace within four months of the relevant decision.

Therefore, the Constitutional Court suggested that it would be preferable for VME-ACPs to be legally obliged to bring any such decision before the justice of the peace on their own initiative. 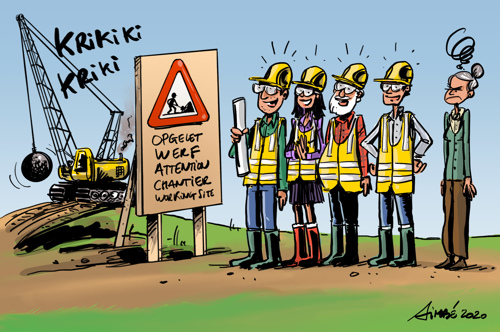 2. How did the legislator resolve this?

In order to remedy the cancellation by the Constitutional Court, the legislator provided for an adaptation of articles 577-7 and 577-9 of the Civil Code.

What exactly does this mean?

2.1 The possibility of a decision by a 4/5th majority vote of co-owners is reinstated

It was clear that the Court did not dismiss in its entirety the possibility of taking a decision by 4/5ths of the co-owners, but it considered it important that additional guarantees should be put in place to protect the ownership rights of the co-owners.

Therefore, the legislator again ruled that the general meeting of co-owners could decide by a 4/5th majority of the votes to demolish and rebuild the building, provided that there are reasons of hygiene or safety or if the cost of adapting the building to the legal provisions would be excessive.

The law also created the possibility for the general meeting of co-owners to decide by unanimous vote to the complete demolition and reconstruction of the building, even when the reasons for a decision by a 4/5th majority to demolish or to reconstruct the building (reasons of hygiene or safety or related to the cost price) are lacking.

Compared to the old, cancelled version of the law, this regulation is not new, but as a matter of fact only reinstated.

2.2.1 The VME-ACP must initiate the procedure itself

An important change concerns the procedure. The obligation to initiate the procedure now lies with the co-owners' association itself in the event that a decision to demolish and/or rebuild is taken by a 4/5 majority unless the decision is taken unanimously by all those with voting rights at the general meeting.

It is the VME-ACP that has to address the justice of the peace within four months from the date of the general meeting.

The claim must be directed against all co-owners with voting rights in the general meeting who have not approved the decision.

The justice of the peace will then have to judge whether the decision of the general meeting of the VME-ACP is lawful and may appoint an expert to advise on the appropriateness of the amount of a compensation.

2.2.2 The procedure will be entirely at the expense of the VME-ACP

Also new is that all judicial and extrajudicial costs and fees of this claim to be initiated by the VME-ACP will always be at the expense of the association of co-owners without any contribution from the co-owners against whom the claim is directed.

3. What are the consequences of the proceedings?

As long as the procedure is ongoing, the VME-ACP will not be able to execute its decision and the demolition and reconstruction plans will have to be postponed.

On the one hand, this is a positive evolution because there are more guarantees that the ownership rights of certain co-owners are fully respected. On the other hand, however, it is to be feared that there will still be many buildings for which any action to improve or demolish them will be blocked until the end of legal proceedings, resulting in problems for housing quality and hygiene.

On the other hand, the construction plans of the VME-ACP are suspended until the end of the legal proceedings, which often take a long time. In the meantime, the VME-ACP will still have to carry costs for repairs if, among other things, the housing quality and/or hygiene is compromised. In view of the intention to proceed to a demolition of the building at the end of the procedure, the cost for the interim repairs - if the judge confirms the VME-ACP's decision to demolish - will be completely lost.

Furthermore, the question remains open as to what to do with decisions to demolish and to rebuild taken prior to the amendments made.