Corona crisis and Urban law in the Brussels Capital Region

The Government of the Brussels-Capital Region has also adopted a decree suspending all mandatory deadlines and appeal deadlines, as well as all deadlines whose expiry has legal effect.

The planned suspension initially lasted one month and ran from 16 March to 15 April 2020.

However, the government had the option to extend this period twice for the same duration by a decision in which it justifies the need to do so in the light of developments in the corona crisis.

1. What exactly are the deadlines that will be suspended?

This concerns all deadlines for which non-compliance will result in a penalty. For example:

But this also concerns the non-binding deadlines. More specifically, the deadlines that have legal consequences upon their expiry. For example:

Deadlines whose failure to comply with this provision has no legal effect will continue to run. 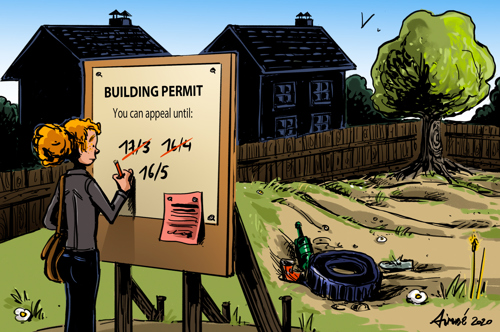 2. Does that mean that the whole permit system is at a standstill?

The Region already indicated this is not its intention. Public inquiries and consultative committees cannot take place, but the authorities are able to take measures that are compatible with the measures taken to combat the Coronavirus, for example :

Applicants for a permit do not necessarily have to remain inactive either.

Incomplete applications may be completed, allowing the applicant to receive an acknowledgement of receipt of the entire application or, where appropriate, modified plans may be submitted after the public inquiry and/or the opinion of the consultation commission has been completed. All this must be done by registered mail.

As from 2 April 2020, Urban.Brussels also is organised electronically. Applications can be submitted digitally and project meetings can be organised by video and audio conference.

3. What else has been decided?

General assemblies, neighbourhood committees, support committees and steering committees in the framework of the development and implementation of urban revitalisation tools cannot meet.

With regard to the premiums for housing renovation and façade embellishment, the following deadlines will be suspended :

With regard to the right of pre-emption, the deadlines are suspended for :

In the case of a sale by public auction subject to the right of pre-emption, the above-mentioned mandatory deadlines must be suspended.